Your 8 days Casablanca to Marrakech desert tour can be modified and designed according to your requirements.

Since our first purpose is to make our clients happy, we provide the finest possible service throughout your trip with Morocco Tours Company.

Our drivers are fluent in a variety of languages and will, of course, be happy to offer their insider knowledge about all of the most intriguing destinations.

Your trip with us will include plenty of rest stops and a manageable driving distance, so you’ll have plenty of time to visit and learn about the most interesting sights.

For your comfort and enjoyment, we only offer the latest and most advanced 4×4 vehicles.

To get a taste of the real Moroccan culture, this 8-day tour from Casablanca to Marrakech is a great option. Morocco’s imperial cities of Fes, Marrakech, Meknes, Rabat in addition to the Sahara Desert of Merzouga  are all included in this tour. Visit Hassan II mosque, the largest Mosque in Aferica, and then continue on to Rabat, Morocco’s fascinating capital city. Hassan Tower is a must-see. Next, Head to the city of Meknes, where you’ll find a number of noteworthy tourist attractions, including the Bab Mansour and Lhdim, as well as Volubils, a Roman remains that dates back to the 2nd century AD.

Our next stop will be Fes, where we’ll spend a full day exploring the city’s most popular attractions, including the Royal Palace, Leather Tanneries, and Quaraouine University, the world’s oldest university. After leaving Fes, you can stop in Ifrance and the Ceadar Forest, the largest forest in Morocco, where hundreds of Barbary Apes live. Continuation of our eight-day tour to Merzouga Desert. On the journey, take in the breathtaking views of Ziz valley; once in Merzouga, have the most pleasurable camel trekking experience of your life; see a spectacular sunset; and spend an unforgettable night in the Sahara Desert with a drumming show.

Merzouga Desert exploration Meet nomadic people and dress in their distinctive turbans. Then continue your travel through Erfoud to Todra Gorges, where you may visit some fossil finds museum. When you get at Todra Gores, try mountain climbing or, if you prefer, take a trip down a wonderful river with a local guide.Following that, explore Dades Gorges and Skoura, the home of 1000 Kasbahs, before continuing to Ouarzazate, where you’ll see a film studio and then Ait Ben Haddou Kasbah, before going to Marrakech. Next, Marrakech Full Day Sightseeing includes visits to the main tourist destinations in and around Marrakech, including Ourika, Alkoutobia, and the Famous Dejamaa Lfna.

Our 8 days Casablanca to Marrakech desert tour will start from the airport where you will meet your tour guide and departing towards Rabat With your first glimpse of Morocco, head to Hassan II Mosque, Africa’s biggest mosque, which is embellished with beautiful tiling (not possible in Friday). then continue to Rabat the capital city of Morocco where we will visit the most beautiful attractions including Hassan Tower and the mausoleum of Mohammed 5 The tile work within the mosaulemen is rather impressive, with excellent tiles and decorations. Next,  we travel via the Atlas Mountains expecting to get in Meknes at midday. After lunch, start exploring the majestic monuments of Moulay Ismail Dynasty. Afterwards, we visit Volubilis then, Roman ruins which is spead over larges area, it is worth visiting. After that, we continue to end our day in the cultural city of Fes.

Enjoy a full day of sightseeing in Fes , Morocco’s oldest imperial city, which boasts a number of historic sites. We will begin our sightseeing day by meeting with a local tour guide who will provide you with real facts about each historical monument and will allow you to visit the famous locations of Fez such as Medina, Al Karaouine University (the world’s oldest university), Tanneries, then  Visit Dar Lmakhsan, or the Royal Palace, which is the Royal Palace of Morocco’s king. This palace is noted by its exceptional architecture, it  was built during the Alaouite period. We resume our exploration of Fes after lunch. Spend the night in a Riad or a hotel. 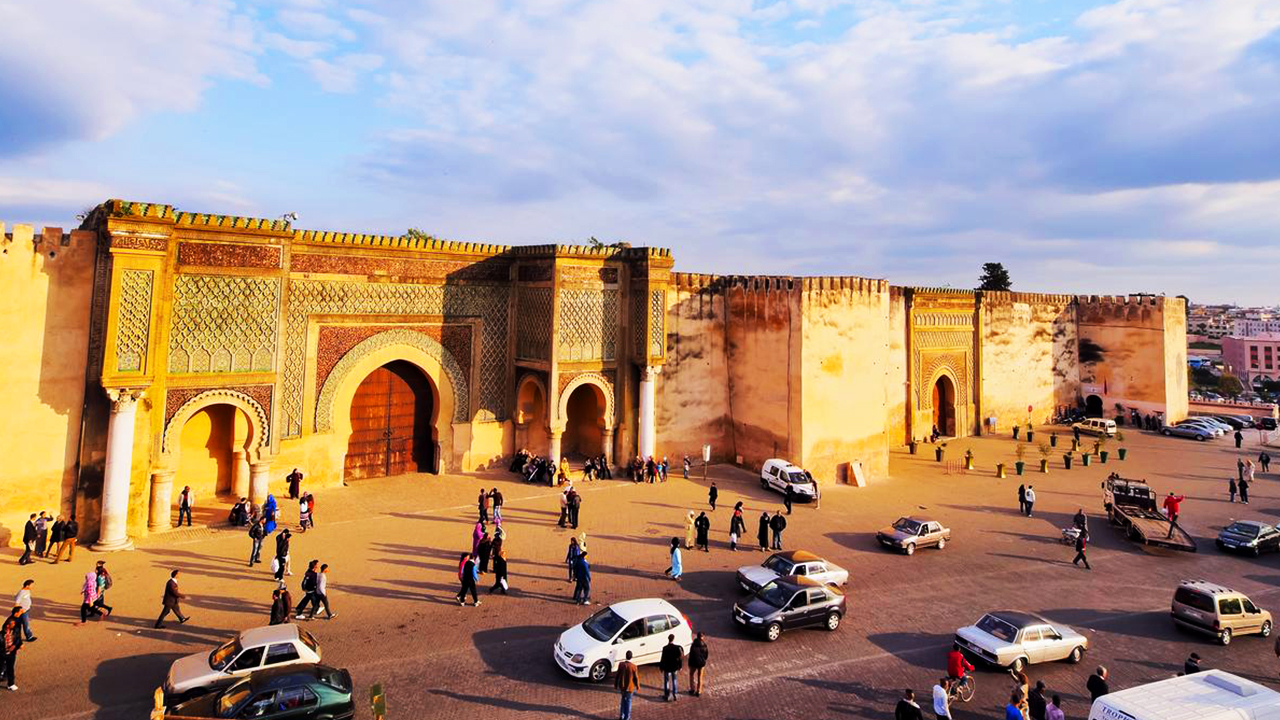 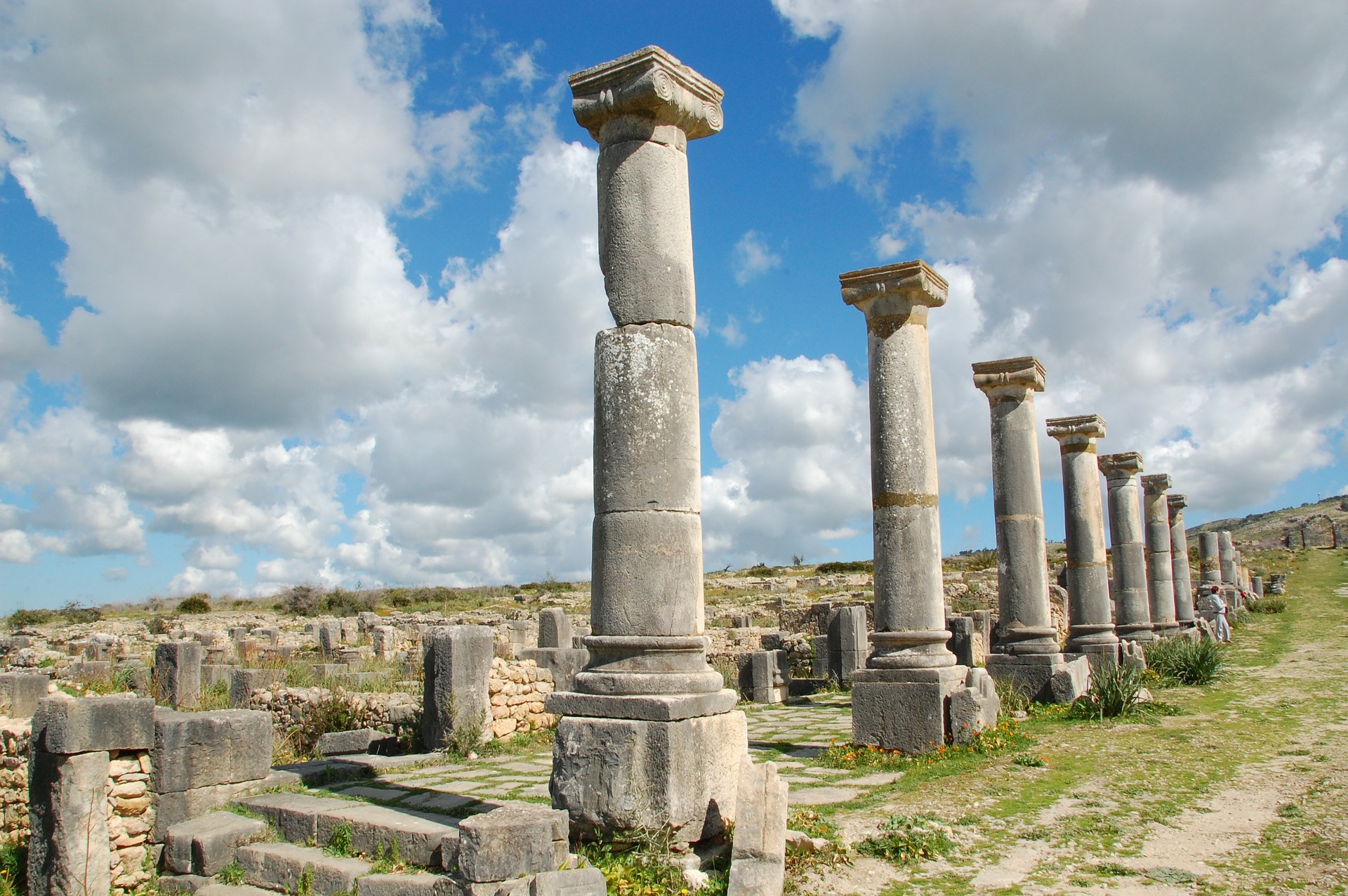 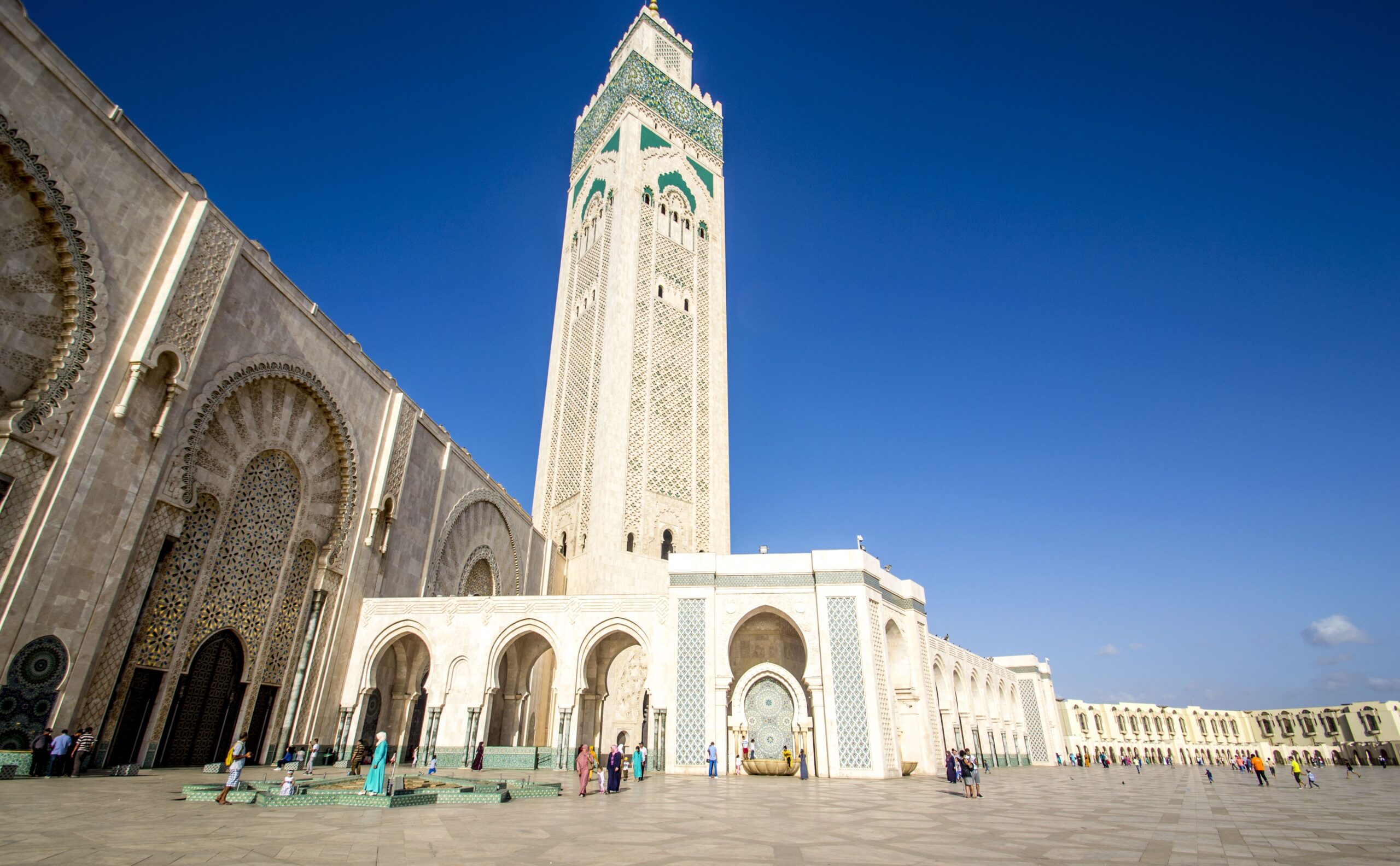 Start at 8:00 heading to Sahara desert of Merzouga via Ifrane the most fascinating city in Morocco known as ‘’ the little Switzerland of Morocco’’ later we pass through Cedar forest where thousands of wild monkeys live. Lunch will be in Midelt. Then, we’ll continue our 8-day Casablanca to Marrakech desert tour via Ziz valley, where you’ll see the breathtaking natural sceneries of Tafilalt oasis. Once in Erfoud, which is famed for its fossils and date festival, Following that, we travel to Rissani, where traditional souks (markets) sell Barbarian handicrafts, traditional clothing, and turbans. Upon arrival in the desert, you may climb the highest dunes to witness a dumbfouding sunset then return to your dune line Hotel for an overnight.

After breakfast at the Riad in Merzouga we will start our day by exploring Merzouga surroundings. Later on,  we travel around the Erg Chebbi dunes to visit Berbers communities, explore their traditional tents, try their Berber Pizza, and get to know about their way of life. Next, we visit khamlia (Merzouga area) where you will meet a musical group of black skinned people who had transmitted their unique music from Mali. After lunch, we go to the dune line where you Begin you desert adventure on a camel, traveling Erg Chebbi’s massive dunes and getting some amazing pictures along the way. You will be greeted with mint tea upon your arrival at the camp. After dinner, Join a drumming party around the campfire. before a relaxed overnight at your private tented room. 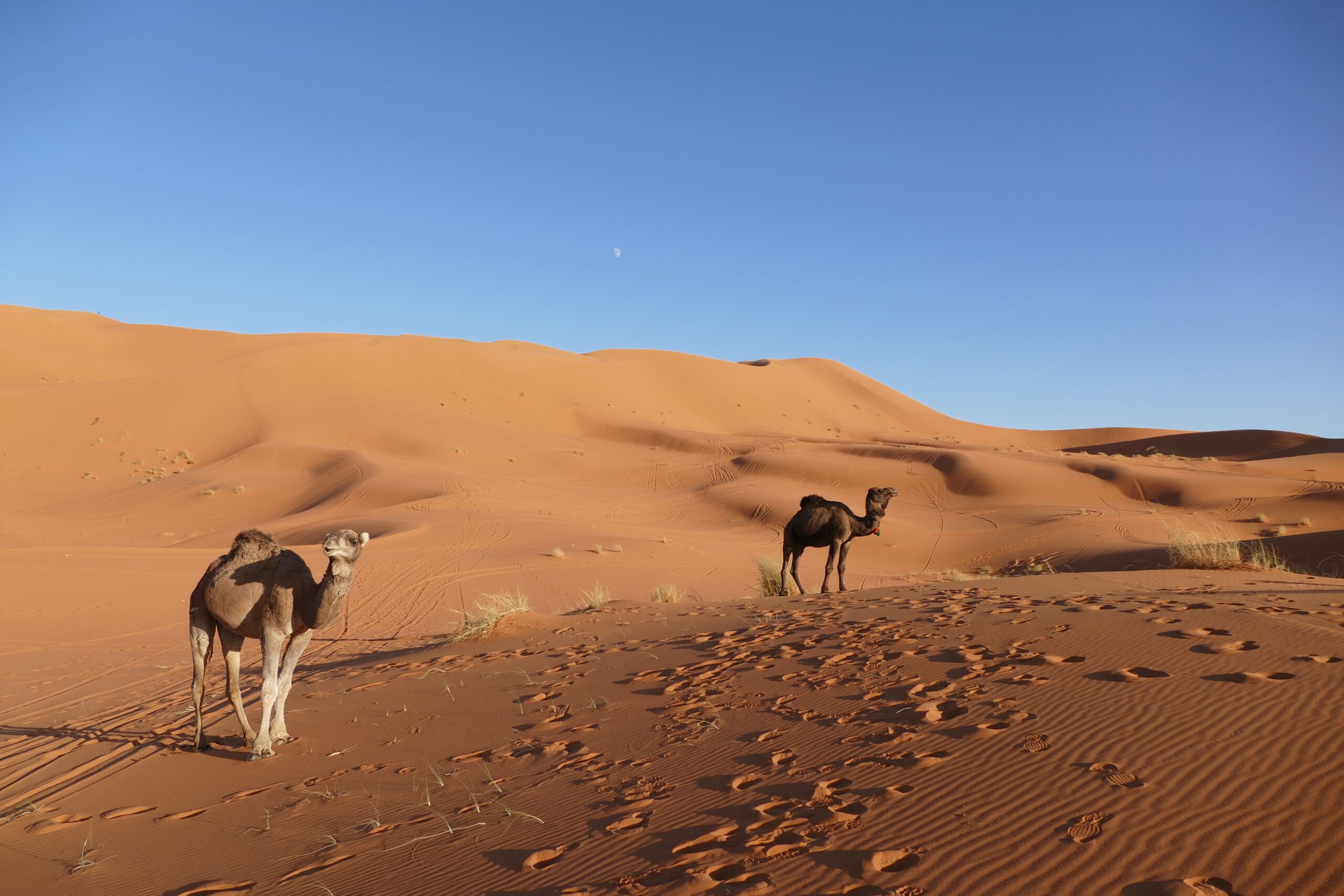 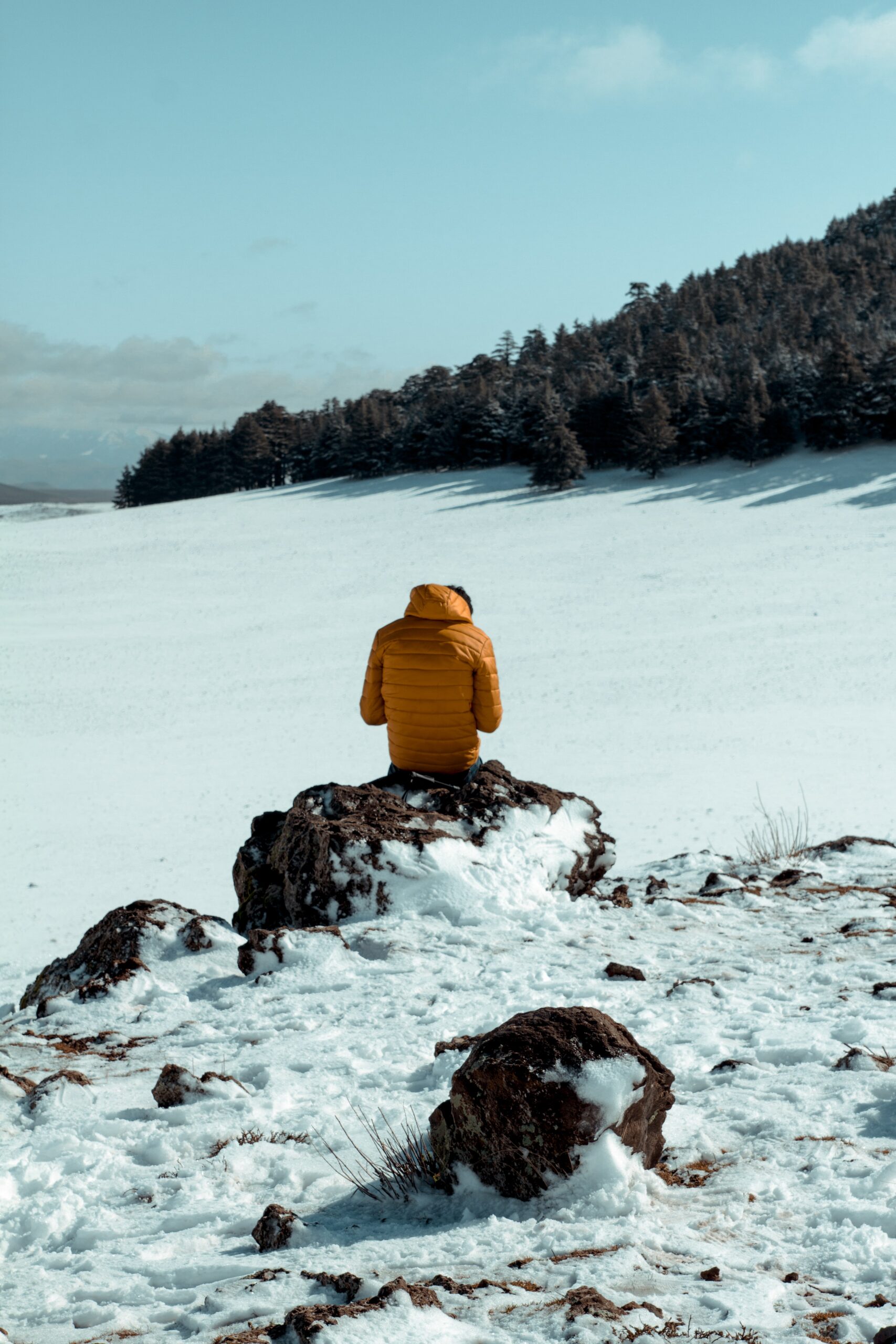 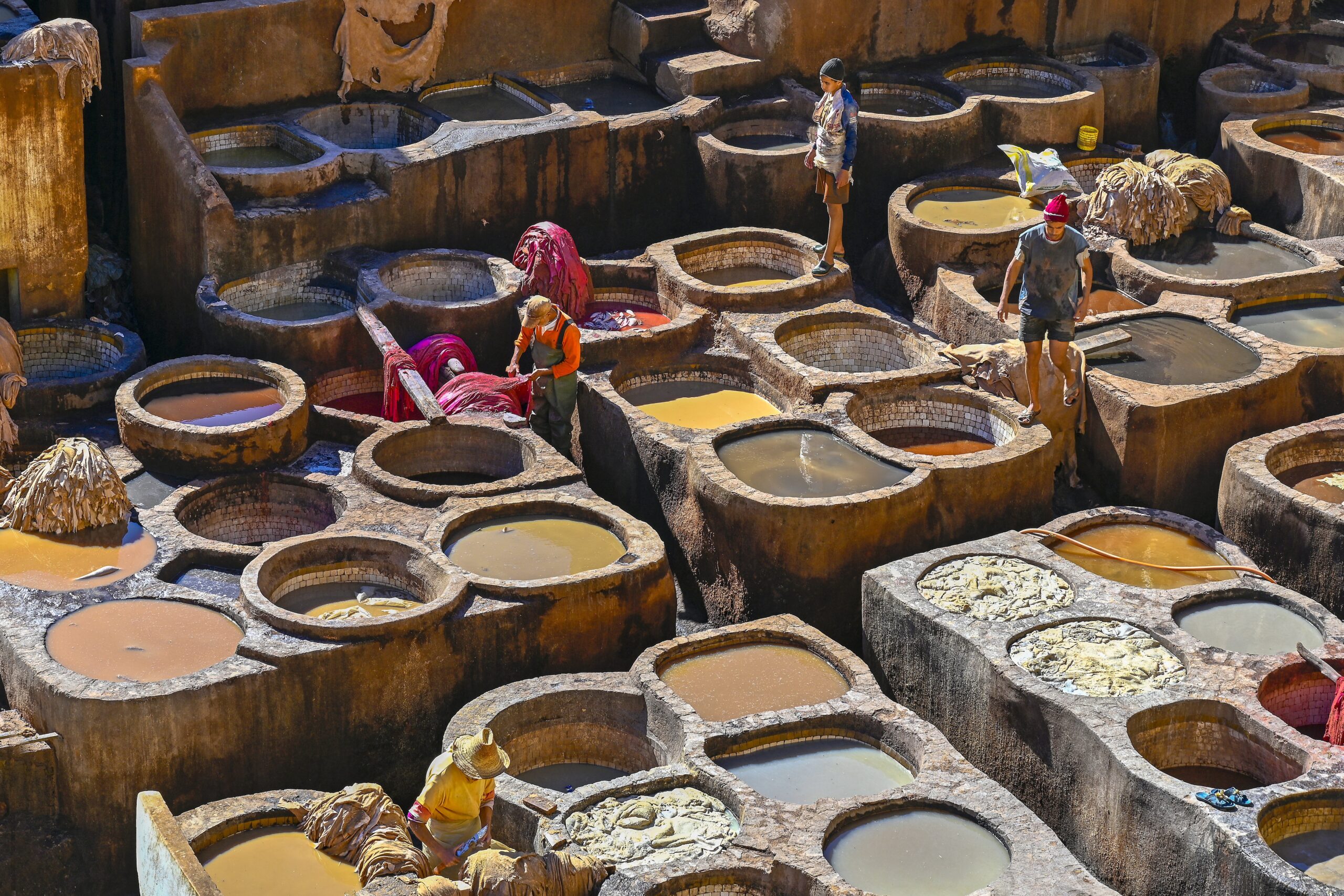 After photographing spectacular sunrises in the desert’s dunes, we continue our journey via Rissani’s Alaouiyat dynasty. make a visit to some unique historical places around the city. Then we continue on our  to Todra Gorges, passing through various little communities along the route. When you arrive at the Todra gorges, you are free to explore the narrowest gorges as well as the Todra river with the assistance of a local tour guide who will provide you with astonsihing information about it, If you’re interested, you may try your hand at mountaineering following the instructions of local guide. After lunch in Tinghir, we make our way to the Dades Gorges ! The dinner & overnight in a kasbah.

We continue our 8-day tour from Casablanca to Marrakech through Skoura, the home of 1,000 Reapplied kasbahs. Making a visit to Ameridile Kasbah in the skoura valley, a famous kasbah famed for its exceptional architecture. We visit a film studio and cinemagraphic museums on the route to Ouarzazate, and then proceed to Ait Ben Haddou, a walled town and popular location for film producers. Continue driving to Marrakech across the Tizi N Touchka pass. You will be taken to your accommodation upon our arrival in Marrakech.

The entire day will be spent exploring Marrakech. First, we visit al-Koutoubia Mosque, Menara, and so on. In the afternoon, we go to Ourika, where we take in the amazing scenery and make a visit nomads families. Late afternoon, We get back to Marrakech to attend some fantastic activities in Djeemaa Lfna square (musicians, magicians, sneak charmers…). Dinner will be out (if you would like) at a special restaurant and spend the last night of this 8 days Casablanca to Marrakech desert tour at the hotel.

your 8 days from Casablanca to Marrakech via Sahara desert ends,  our driver will transfer you to the airport in Casablanca or Marrakech. 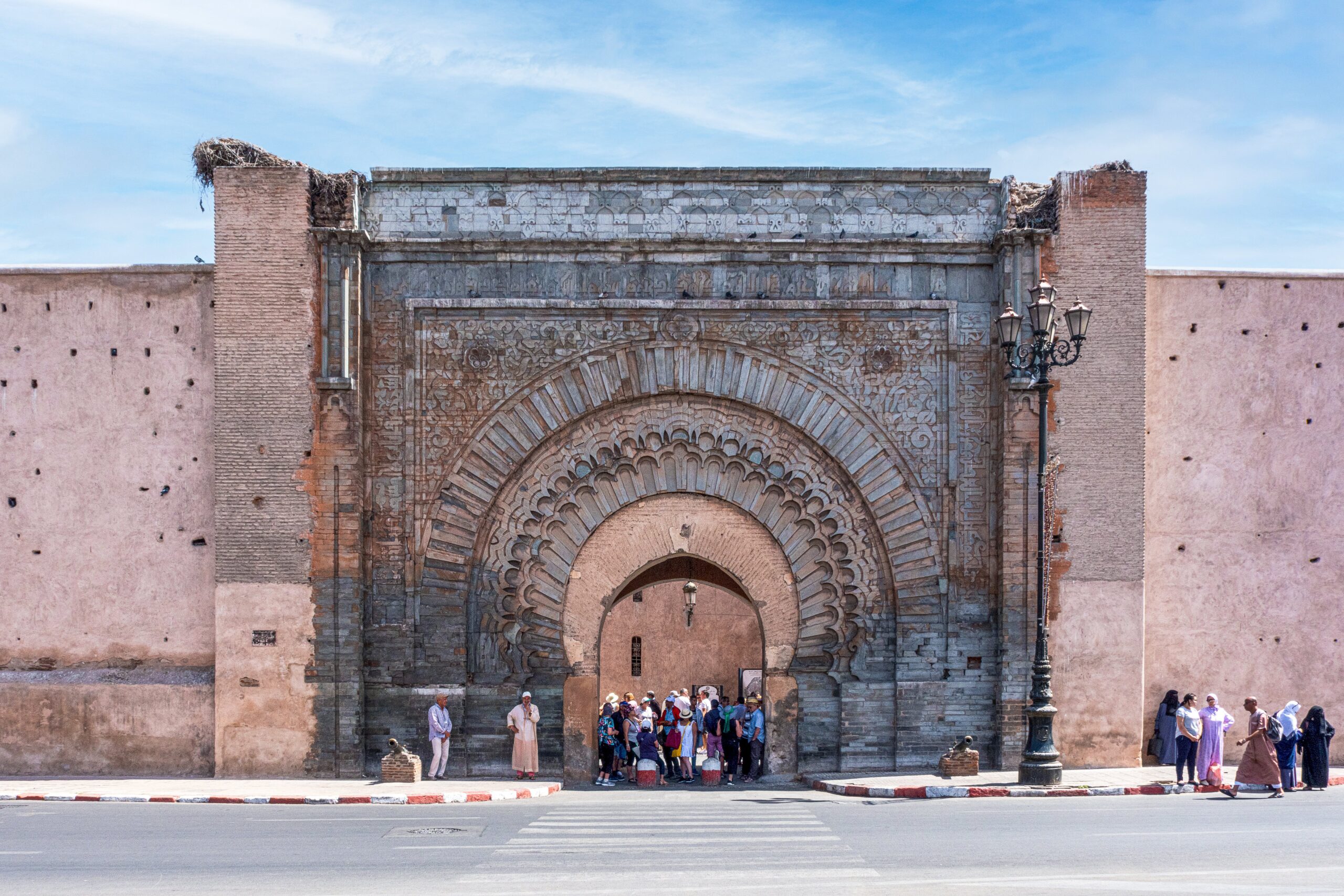 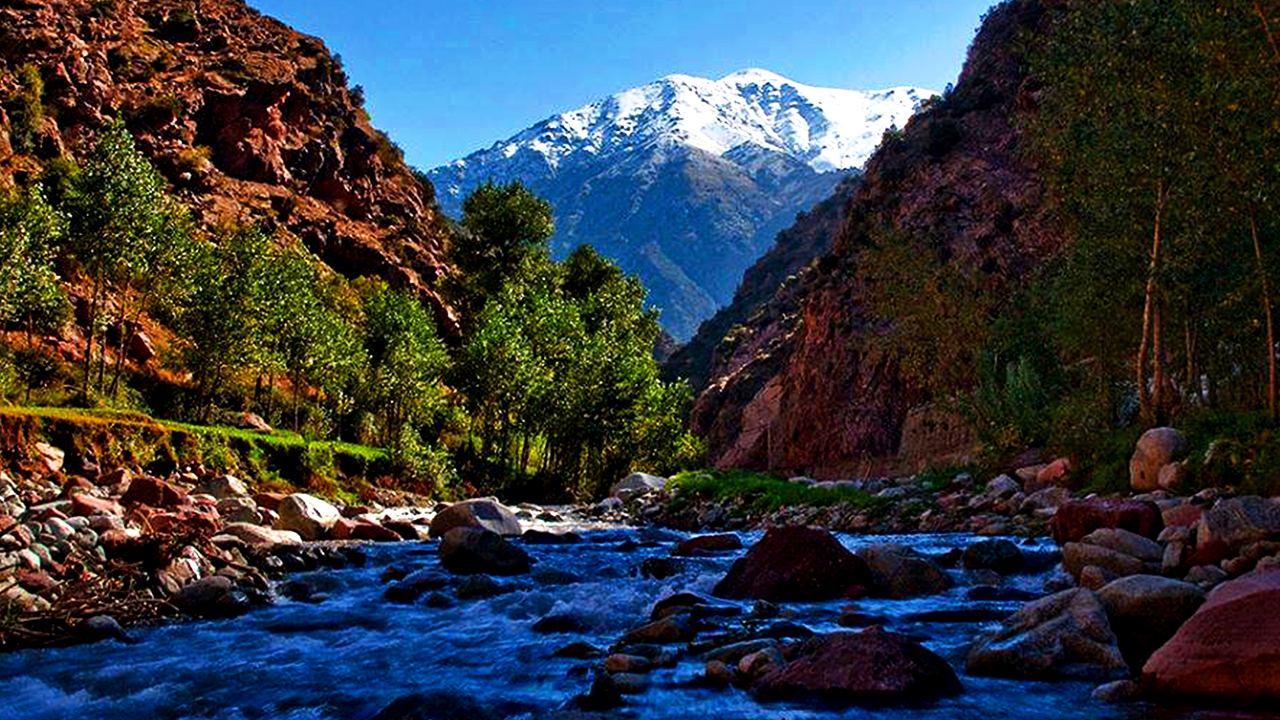 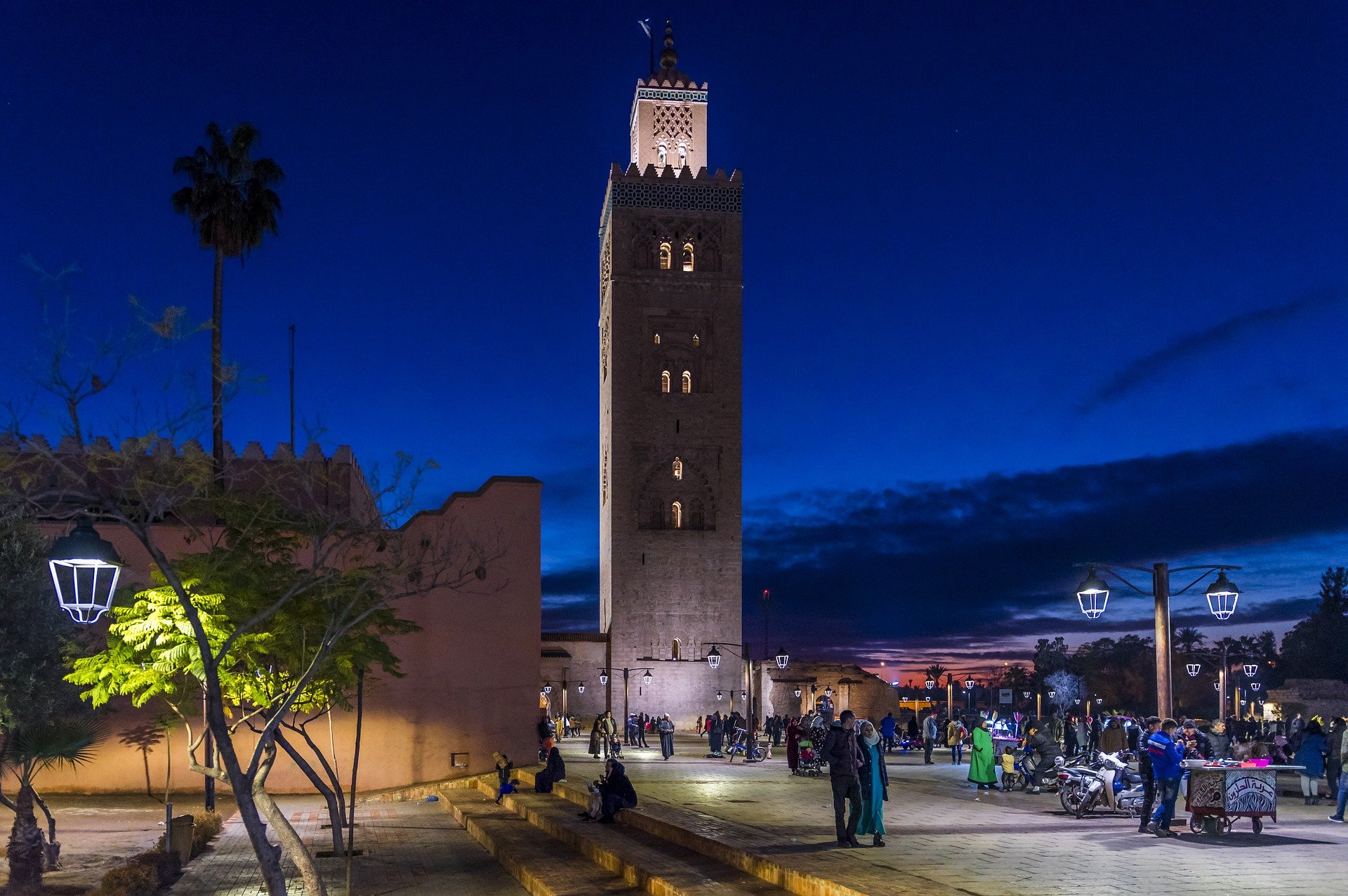 Pick up/ drop off.

Wine is availabe to buy.

Sleeping bag is not needed.

Please enter a few details in the form below. Within a few hours, one of our team members will contact you to discuss your enquiry.

We will gladly accept online payments as well as cash in person.

We generally ask for a small deposit via Paypal or any alternative payment method to confirm the 8 days Casablanca to Marrakech desert tour, and the remaining to be paid to your tour guide at the time of pick-up.

For a full refund, you must cancel at least 15 days prior to the tour’ start date.

If you have any question regarding this tour feel free contact us and we will get back to you as soon as possible.

2 Days Tour From Marrakech to Zagoura

2 Days Tour From Marrakech to Merzouga

3 Days Tour From Marrakech to Merzouga

4 Days Tour From Marrakech to Ouarzazate

5 Days Tour From Marrakech to Merzouga

6 Days Tour From Marrakech to Merzouga

4 Days Tour From Marrakech to Ouarzazate

3 Days Tour From Marrakech to Merzouga

2 Days Tour from Fes to Marrakech

3 Days Tour from Fes to Merzouga

4 Days Tour from Fes to Merzouga

5 Days Tour from Fes to Marrakech

6 Days Tour from Fes to Marrakech

1 Days Tour from Fes to Chefchaouan

5 Days Tour from Fes to Marrakech

6 Days Tour from Casablanca to Marrakech

7 Days Tour from Casablanca to Marrakech

8 Days Tour from Casablanca to Marrakech

15 Days Tour from Casablanca to Marrakech

6 Days Tour From Tangier to Marrakech

10 Days Tour From Tangier to Marrakech

3 Days Tour From Fes to Merzouga

5 Days Tour From Marrakech to Merzouga

Open chat
Welcome to Morocco Tours Company!
Let us plan and organize your tour around Morocco.